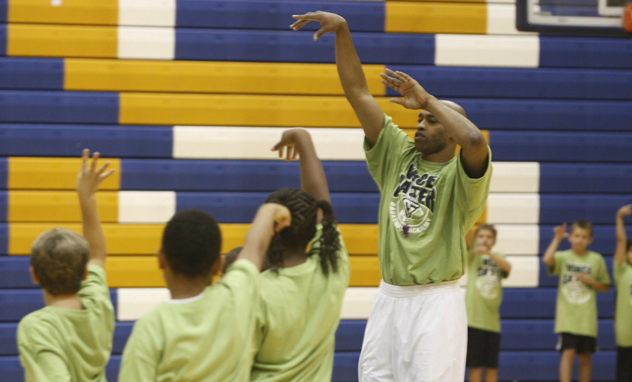 Once again, the Vince Carter Athletic Center at Mainland High School teemed with activity as over 120 girls and boys ages 8 to 17 on July 13-17, 2009, participated in the Vince Carter Youth Basketball Academy-Florida.  Vince’s academy has two daily sessions that allow Vince to focus on specific age groups at different times of the day.  The split-session format allows for more actual on court activity for the campers.

This year’s academy drew twenty-three campers all the way from Brazil!  What a wonderful experience this was for these youngsters as well as our local campers!  The language of basketball is indeed universal and needs no translation.

Vince’s camp is unique because it is centered on a basketball to life concept.  Vince engages the participants in a variety of activities that include basketball skill building, personal growth and development, life management skills and more.  As always, Vince’s constant presence at the camp allows the campers an opportunity to interact with Vince on a variety of levels.

In addition to a week of fun and instruction, campers receive a camp t-shirt, Gatorade bottles and towels, and special prizing.  Each camper also receives a team picture with Vince and an autograph on the item of his or her choice.  Special awards were given each day to the “Camper of the Day”.  At the end of the week, one camper is designated the “Camper of the Week” for exhibiting a balance of the five factors of success:  vision, teamwork, balance, hard work and perseverance.

On the final day, Vince along with his former Mainland teammates, high school opponents, and friends dazzled the parents and campers by demonstrating his skills on the basketball court in the annual Mainland Legends game.  Whether focusing on his five factors of success or focusing on the rim for a thunderous slam-dunk, Vince Carter once again provided a special camp opportunity in a way that only he can.

Vince is currently planning next year’s camp, which will be held at the Vince Carter Athletic Center in Daytona Beach, FL.  There is an energy level at the camp that you simply must experience, and we plan to take next year to another level, so do not be left out.  Check Vince’s website often for upcoming details on how you can register for next year’s camp.  Hope to see you there. 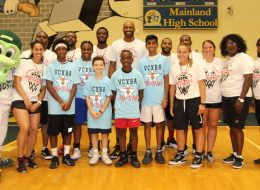